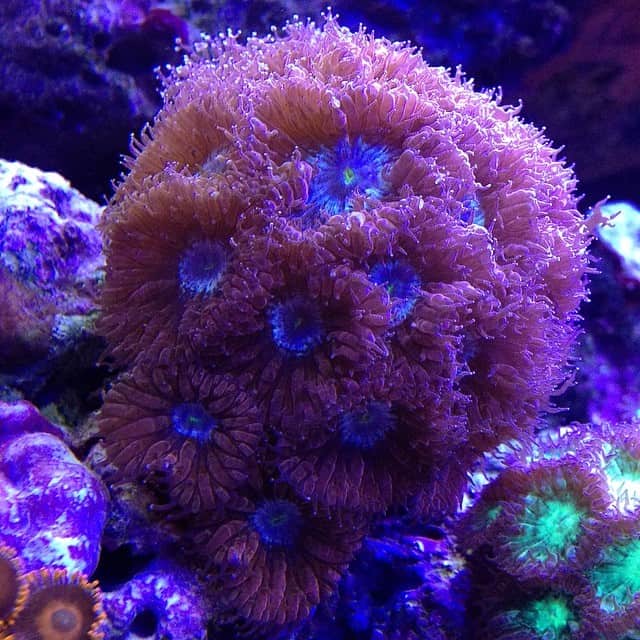 Blastomussa Coral is also referred to as Open Brain Coral, Swollen Brain Coral, Wellsi's Brain, Big Pipe Blastomussa, or alternately, as its scientific name Blastomussa wellsi (B. wellsi). It is a Large Polyp Stony (LPS) coral that is dark red or green in the wild, but has aqua-cultured varieties that are purple, yellow, red, pink, green, or sometimes blue.

Perhaps the key feature of B. wellsi is its "open" appearance. Individual corallites tend to have bulbous polyps that surround an often differently-colored mouth. Individually the corallites look like "open brains", and collectively they are not a traditional coral colony, but genetic clones of a single corallite. But regardless of this, B. wellsi makes for a beautiful, easy-to-care-for aquarium centerpiece with an amazing dome-like shape and stunningly vibrant colors.

Table of Contents
Blastomussa Coral Reference Sheet
Blastomussa: The Open Brain
Lighting
Flow
Placement
Propagation
Frequently Asked Questions
What are the differences between Blastomussa and Acans?
Can I keep Blastomussa in a Nano Reef?
How Do I Feed Blastomussa?

Blastomussa should be somewhat easy to care for, so long as you keep in mind its lighting, water, placement, and feeding requirements. In general, the coral should be placed among rocky surfaces instead of sandy ones. It can be the centerpiece of an aquarium as it should be placed at the bottom of the tank. B. wellsi requires moderate lighting -- as too much or too high lighting will cause the polyps not to open -- but instead, close and recede. A low to moderate flow of water is necessary as fast-flowing water will cause the polyps to close. Finally, B. wellsi needs turbid, or cloudy, water conditions in order to thrive.

As stated before, its polyp growth creates a dome-like shape (some refer to B. wellsi as the "Moon Coral") with individual polyps reaching 4 to 5 inches in diameter. These make a large surface area for B. wellsi's nocturnal feeding habits. B. wellsi is a relatively aggressive coral species and has sweeper-type tentacles. These tentacles can extend at night and sting/attack other corals. For this reason, it is a good idea to keep B. wellsi isolated and away from other coral species. That said, B. wellsi serves as a shelter for animals such as sponges, mollusks, and other invertebrates, at least in the wild.

B. wellsi is often confused with Blastomussa merleti, or the "Pineapple Coral". Though they are related, they are different species of the family Scleractinia incertae sedis. The easiest way to tell the difference between the two is polyp size. While B. wellsi's polyps are usually 4 to 5 inches in diameter, B. merleti's polyps are smaller, about 1 to 2 inches in diameter. Also, B. merleti has corallites that are tubular and long. Whereas B. wellsi's corallites are slight more hardy, B. merleti's corallites are brittle to the touch, and can easily be broken.

You will want to use low to moderate lighting (50 - 100 PAR) with B. wellsi. In the wild, the coral exists in depths from 0 to 131 feet, so lighting conditions should match a corresponding level of intensity. Some sources actually suggest that very low lighting (1 - 50 PAR) is necessary for the coral to thrive, with overexposure to light a more frequent risk than underexposure. If you are indeed simulating conditions of 100 feet below (or greater) it would therefore make sense to keep your lights at low levels.

If you are using metal halide (MH) lights, make sure to provide some shading. The B. wellsi has been found to shrivel if it is exposed to high lighting, and MH lighting without adequate shading will ultimately cause this to happen. A receded or shriveled coral can not feed, and its health will suffer as a result. Keep an eye on your B. wellsi coral, and make sure it has colorful, bulbous polyps.

If the B. wellsi is shriveled with dark spots, or has undergone coral bleaching (when the coral turns completely white) your light levels are probably off (in the case of coral bleaching, they're probably too high). In this case, you should change your lighting. You might even need to replace the coral and start caring for a new instance of B. wellsi. In any case, adjust your lighting to give the B. wellsi plump, rounded polyps with vibrant, full colors.

B. wellsi needs a low to moderate water flow in order to survive. In addition to this, it will need turbid, or cloudy water (this helps reduce light intensity). If the water is kept at strong currents, the polyps will close. Once the polyps are closed, B. wellsi becomes impossible to feed. Therefore, keep your water flow levels at lower speeds, and the polyps will remain open and ready to feed.

As B. wellsi can grow at fairly deep levels in the wild, in order to emulate this environment, it should be placed at the bottom of your aquarium. It is not recommended to place the coral on sandy surfaces, rather, you should put B. wellsi on hard rocks or rocky outcroppings. As a fairly aggressive coral species, it is recommended that you isolate B. wellsi from other corals. Its tentacles -- in addition to coming out at night to feed -- will sting other surrounding corals in close proximity. Therefore keep B. wellsi far away from other corals and it will be able to live and feed without inhibiting the other species.

B. wellsi, like others in the Blastomussa genus, is a hermaphroditic species that can reproduce sexually and asexually. To reproduce sexually, B. wellsi releases eggs and sperm at the same time. These combine to form a planula larvae, free-swimming flattened, plankton-like animals. The planula larvae then form a polyp that expels calcium carbonate, developing into coral. This is common in the wild, but fragmenting practices are more common for propagating B. wellsi in captivity.

To propagate B. wellsi, you will want to wear gloves. Then, using strong scissors or other strong cutting tool, cut off an individual polyps of B. wellsi at their base. Place on a new rock on the bottom and make sure that they are in a low to moderate water flow area. This will encourage healing.

What are the differences between Blastomussa and Acans?

Acanthastrea echinata, or Acan coral, is also known as Acans or the "starry cup" coral. Acans are part of the Lobophylliidae family of corals. Compared to Blastomussa, especially B. wellsi, the polyp formations of Acans are located closer to the mouth of the polyps, whereas B. wellsi's bulbous polyp formations are generally closer to the edges of their polyps. Though Acans are still LPS corals and take on a somewhat dome shape, its polyps are closer together and have a finer, less bulbous appearance.

Can I keep Blastomussa in a Nano Reef?

A nano reef (a tank of 30 gallons or less) is a place where you can keep a Blastomussa, especially B. wellsi. However, as an aggressive species, you will want to keep it away from any other corals you may put in the reef. Isolate the B. wellsi so that it will be able to grow without interfering other coral species. Some sources say that a minimum of 29 gallons of water is necessary for B. wellsi to thrive, so use your best judgement.

How Do I Feed Blastomussa?

Feeding B. wellsi does not necessarily have to be a proactive process. The coral feeds off of dissolved organic material already in the water, or small organisms such as plankton. They also receive nutrients from zooxanthellae, marine algae with which corals like B. wellsi have symbiotic relationships.

However, it is often the case that there is not enough organic material to sustain multiple instances of B. wellsi polyps, let alone the numerous other corals you may have in your aquarium. In this case, you will want to feed B. wellsi mysis (tiny shrimp-like crustaceans), zooplankton, or engineered copepods. You can also use tiny chopped-up shrimp or fish.

Make sure you feed each individual polyp, as they are each individual animals (not like a traditional coral colony). Upon feeding, the polyps will react and close -- sometimes to a microscopic mixture of organic materials, other times around whole small fish or shrimp. It is recommended to feed your B. wellsi several times a week, in order for the organisms to grow. It is a nocturnal feeder, so feed B. wellsi at night.