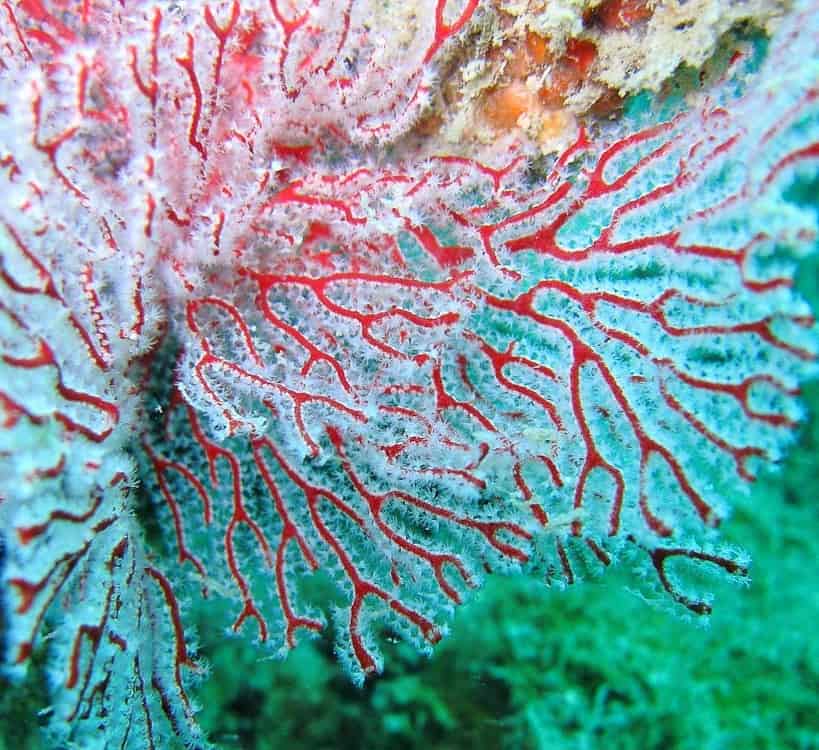 Gorgonian Corals, belonging to the order Alcyonacea, are a group of soft, immobile, cnidarian corals that grow in colonies and whose skeletons are comprised of calcareous substances and/or a protein called gorgonin. They are a large group of corals with a wide variety of photosynthetic and non-photosynthetic species, and are typically found in tropical and subtropical environments.

The order Alcyonacea consists of at least 500 species, with what are usually considered Gorgonian corals appearing in a variety of colors, from purple and red, to yellow, beige, or ruddy with white polyps. In addition to this, Gorgonian corals can be fan-shaped, finger-shaped, blade or whip shaped, or look like polyp-covered rods.

This all can lead to some confusion, but generally Gorgonian corals consist of thin-branched, tree-like colonies comprised of hundreds or thousands of polyps -- ones that secrete gorgonin to build their skeletons. A native to tropical ocean areas, wild Gorgonians can be found in the Caribbean and the Caribbean-adjacent eastern Pacific.

What are typically referred to as Gorgonian corals (the order Alcyonacea) are part of the subclass Octocorallia, the Octocorals -- corals with eight-tentacled polyps. In turn, Alcyonacea consists of three Suborders: Scleraxonia, Holaxonia, and Calcaxonia. Scleraxonia consist of tiny pointed parts (spicules) fastened together by calcified secretions (or organic fibers) to form a skeletal axis. Holaxonia are horned or branch-like corals that use the gorgonin protein to form their skeletons. Calcaxonia are similarly formed, they can have a horn, antler, or fan-like appearance in aggregate.

For aquarium hobbyists, a major distinction in Gorgonian corals are the photosynthetic and non-photosynthetic varieties. Photosynthetic Gorgonians are common to the Caribbean and are often found in shallow waters. They can reach very large sizes, and have colors that are subdued beige, purple, and pink.

Non-photosynthetic Gorgonians are more common in the Pacific, and grow in deeper waters. They can be blue, red, yellow, or similarly more prominent colors. These types do not need as much light to survive and their polyps get their nutrients from organic matter in the water column.

It is important to be careful as to not overexpose the Gorgonian coral, even if it is photosynthetic. If there is too much light, the coral will expel the zooxanthellae and it will lose its color (turn whitish). This the result of this process is called coral bleaching, and can increase the risk of losing the entire colony.

It is important, at least for some species of Gorgonian coral, to have at least a moderate rate of water flow. There are no hard rules that apply to all different types of photosynthetic corals, but they generally need a moderate to turbulent rate. The Encrusting Gorgonian, for example, needs a high enough water flow to prevent algae and cyanobacteria from growing on it, but not so high as to have it spread or grow to the point of overtaking the rest of the aquarium tank.

Similarly, the Purple Sea Blade needs moderate water flow, but the current must be in a sideways and linear direction in order for the colony to grow adequately. Therefore, is best to know the traits of your particular Gorgonian coral species, and the ideal water flow parameters for it.

Like the other factors on the list so far, placement can vary depending on the species. But if you had to categorize placement based on the photosynthetic or non-photosynthetic divide, generally keep photosynthetic Gorgonian corals toward the top of your tank. These species really are found in near-surface reefs in the wild and should be treated as such.

One final thing about placement: you will want to consider temperament, too. Although most Gorgonians are non-aggressive, they still need to be separate from (i.e. completely not touching) other corals. Some Gorgonian corals, like the Encrusting Gorgonian, are actually aggressive and can extend sweeper-type tentacles -- so keep in mind the temperament of the Gorgonian you choose.

It is possible to propagate Gorgonian corals. In order to do this, you will want to cut off the existing branches that are located toward the top of the colony. Then you must use a razor or scissors to cut off the bottom 1/2 or 1/4-inch of the existing exterior tissue, leaving the hard skeletal axis intact. Put glue in the hole of an aquarium plug or stone, and then place the bottom skeletal axis inside. More details are available below ("Can You Frag Gorgonian Corals?").

What Do You Feed Gorgonian Corals?

Photosynthetic Gorgonians (like the Encrusting Gorgonian) can similarly be fed brine shrimp, micro-plankton, and rotifers, but this should be done weekly, as the species can survive well enough on light, a healthy water flow, and organic matter (like that of nearby-residing fish).

What Do Gorgonian Corals Eat?

In the wild, Gorgonian corals eat a wide variety of marine organic matter, as they inhabit a wide variety of environments. Generally they will eat micro-plankton, small brine shrimp, fish detritus, rotifers, and copepods. Some species also get nutrients from zooxanthellae algae.

As Gorgonian corals inhabit tropical and sub-tropical waters, it makes sense to feed your coral with organic matter that would likely be found in your species' natural environment. Most importantly, you will want to make sure the organic matter is small enough for the polyps to consume. Unlike some corals, this food may be on the microscopic level.

Can You Frag Gorgonian Corals?

Yes, you can. You can take the steps illustrated above ("Propagation") and use scissors, bone cutters, a razor, and reef-safe epoxies or glues. If you do not feel glue is right for your frag, fill a PVC pipe (roughly the same size as your cutting) with sand and place the frag inside. You may want to poke holes in the PVC for better water flow.

And speaking of water flow, make sure the new frag is exposed to a steady current of water with moderate light. A moderate and steady water flow will prevent algae and bacterial infection, ensuring your frag can grow in a healthy fashion.