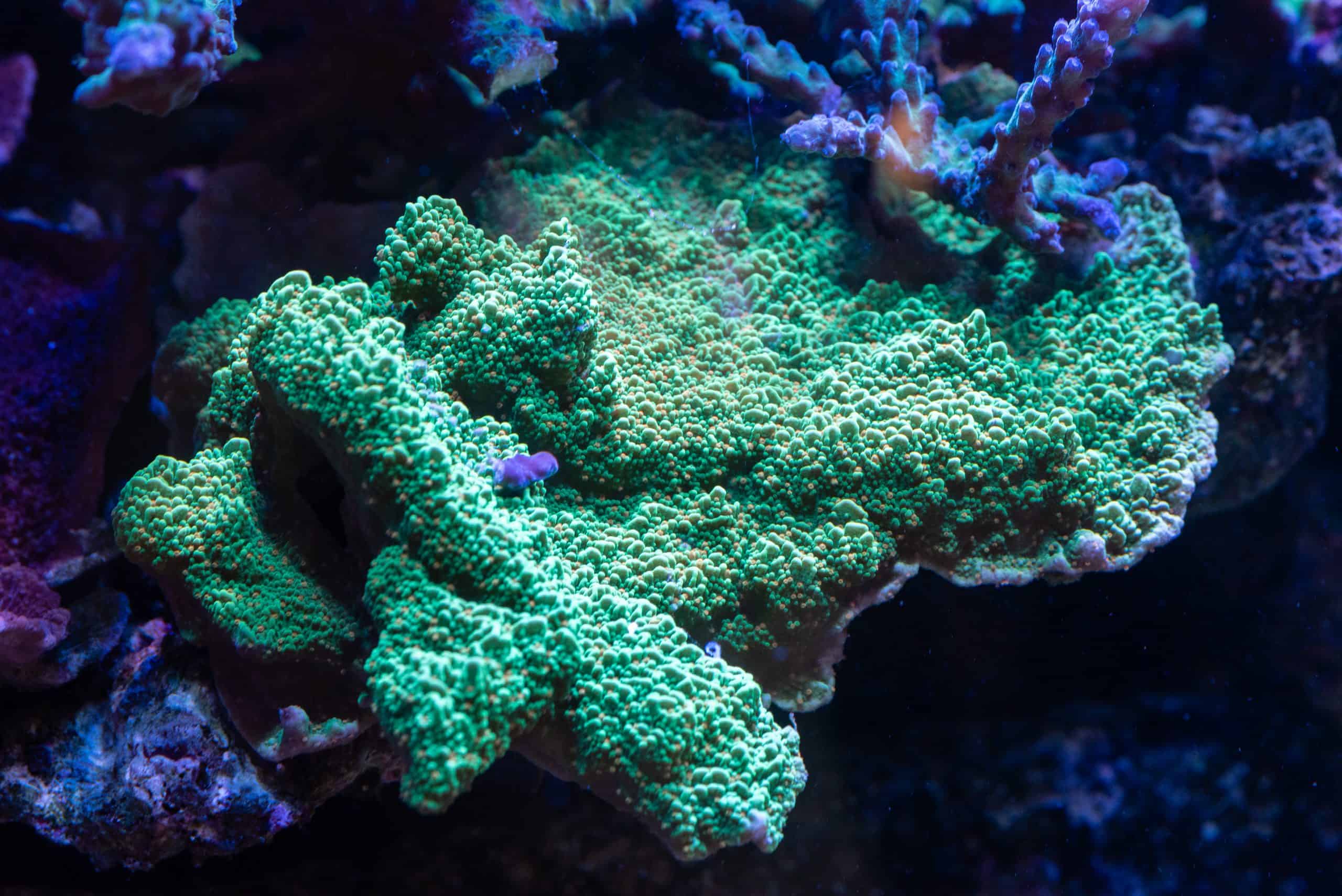 Montipora Capricornis, also known as Plating Montipora or Monti Cap, is an SPS coral staple of the reef keeping hobby.  Known for its general tendency to form flat plate shaped formations, thereby giving it its name, it is one of the most iconic calcifying corals, and while it doesn't usually generate the crazy rainbow colors of some acroporas or zoanthaids, its luminescence is sure to impress anyone who looks into your tank.  There are other types of Montipora, including the Montipora Digitata.  We will cover montipora capricornis care requirements below: while this coral is not as difficult as some SPS, it is definitely not the easiest coral to get full coloration and health from either.

Montipora Capricornis: Large Plates of Color to Fill Out Your Tank

There are generally considered to be three types of small stony polyp ("SPS") corals, at least when it comes to shape: Encrusting, Plating, and Sticks.  Encrusting corals will creep along whatever surface they are stuck to.  Stick corals usually grow mostly upwards--think classic acropora or birdsnest corals.

The last type is the plating corals, which is what we are here to discuss today.  Plating Montipora Capricornis does not follow the rules of either encrusting or stick corals.  Unlike encrusting corals, they will happily grow out over the edge of a rock face, and do not follow the surface that their base is attached to.  Unlike stick corals, Montipora Capricornis grow sideways instead of upwards, although this coral will angle upward if they meet resistance.

Whether you're looking for a coral that has a different shape, or something that's a good solid shade of (usually) red or green, or just a different fast-growing SPS coral to take up some space in your tank, the plating montipora capricornis is a great place to start.

As with most other SPS corals, proper Montipora Capricornis care requires medium to high levels of light.  While not requiring as much lighting as say, most acroporas, they still need more than basically every LPS or soft coral.  Of course, lighting is relative, the lower in the tank the coral sits, the less light will penetrate the water.  But at the same time, if you do not have strong enough lights, it doesn't matter how close you place this coral to the surface.

While it is technically possible to bleach this coral with too much lights, this is an unlikely occurrence.  What is more likely is you don't give your plating monti enough light.  When plating Montiporas are unable to find enough light, they are known to spiral upwards in a cone shape in an attempt to get closer to the light source.  They can also fade a bit and lose that vibrant color that we're all looking for.

High flow is the name of the game to properly take care of plating montipora.  This coral is very well known to collect debris if there is not enough flow, which can subsequently rot and cause damage to the flesh of the plating montipora.  In addition, higher flow brings more nutrients to this coral for it to consume.  Unless you're creating a literal whirlpool inside your reef tank (or ripping it off the rockwork), it is basically impossible to have too much flow for this coral.

It is more important to take into account your overall flow and lighting situation in the tank than worrying about where exactly in the tank you should place your monitpora capricornis.  Generally speaking, this coral should be placed in the upper part of the tank, but under the right conditions can be placed in the middle or lower part of the tank as long as the flow is high enough. This coral is simple to propagate.  Simply break off a part of the coral and you're done! Try to make it a clean cut, and if the edges look at all rough, it may be worth doing a short iodine dip to try to avoid infection.

Plating Montipora Capricornis is a very fast growing SPS coral, so you should be able to frag this coral on somewhat regular occasion.  Usually you will have to frag the coral not because you want to, but because it has grown so much that it is shading over your other corals, and you need to give your other livestock room to grow.

Why is my Montipora Capricornis Turning White?

There are a few potential reasons, and it is obviously good to check on all of them.  If it's just the edge turning white, that's actually a good sign, as the white part is likely new growth.  However, if the whole coral is turning white, start your investigation by looking at your water chemistry, and looking at our checklist of the top four steps for figuring out why your corals may be doing poorly, and how to fix it.

These corals are a bit more touchy than some of the more common corals that people in this hobby generally keep.  Water chemistry swings, even if it doesn't really leave the standard deviations of care, can still bother plating montipora enough for them to start losing color.

Water flow and lighting are also likely culprits for issues.

You may also enjoy: